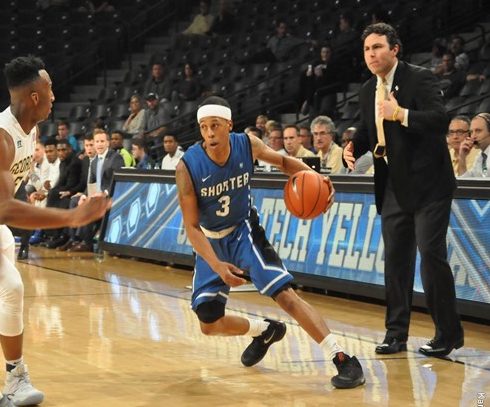 As the basketball game buzzer screamed to announce the end of the fourth quarter, senior guard Phil Taylor shot a hopeful three pointer from beyond the half-court line and watched it hit the front of the rim.

With the short miss, Taylor, and the Shorter men’s basketball team, headed into overtime against Georgia Tech. Yes, the Division I ACC school, that Georgia Tech. Shorter – the tiny, Christian, DII school in Rome, Ga. – was actually going into overtime with the Yellow Jackets.  As a basketball fan and student athlete at Shorter, I was ecstatic.

My brother and I attended the game with the hopes that the Hawks could upset the Yellow Jackets at McCamish Pavilion in Atlanta.

Taylor, the 5’10 guard from Brooklyn, N.Y., led the Hawks with 37 points, 4 assists and 5 rebounds that night. Taylor steered the Hawks into overtime, but the team lost 95 to 87 in the end.

Despite the loss, the team would enter into the season feeling strong, and Taylor would embark on a journey few could have predicted…

Taylor was born in Brooklyn and then migrated to the metro-Atlanta area. After finishing high school at Wheeler HS in Marietta, Ga., Taylor decided to play college basketball at Florida International University (FIU) under head coach and NBA legend Isiah Thomas.

Making the decision to play at FIU over other top programs was based on the coach.

“It was an honor being coached by Isiah. I had offers to go to ACC and SEC schools, but I wanted to be coached by a hall of famer,” Taylor said.

Thomas eventually parted ways with Florida International, as did Taylor. The mellow, but focused guard decided to take time and focus on what he really wanted to do, which was to play basketball.

Finding his way to Shorter, Taylor has done more than just play basketball for the Hawks: He has put Shorter on the map.

Leading the NCAA in scoring,     Taylor has shattered critics’ remarks about guards under 6 feet tall. After scoring 62 points in a home game against Carver College, which broke the GSC’s standing record of 51, Taylor proved that he was a scorer, especially when he was hitting threes over other players 6 inches taller than him.

At that game, I was sitting in my usual spot behind the bench, and I could just feel the magic in the Winthrop-King Centre. Magic. That was what it was like to watch Taylor that night. Every time the Hawks got a stop on defense, Taylor would call for the ball and his teammates would get it to him. Everyone in the gym knew the ball was going to him, and every time he hit another shot, usually a difficult fade away or a three in front on someone’s face, the crowd would explode with cheers.

“I felt like I was the only guy in the gym that night,” Taylor said, adding it was the most memorable part of the season so far. 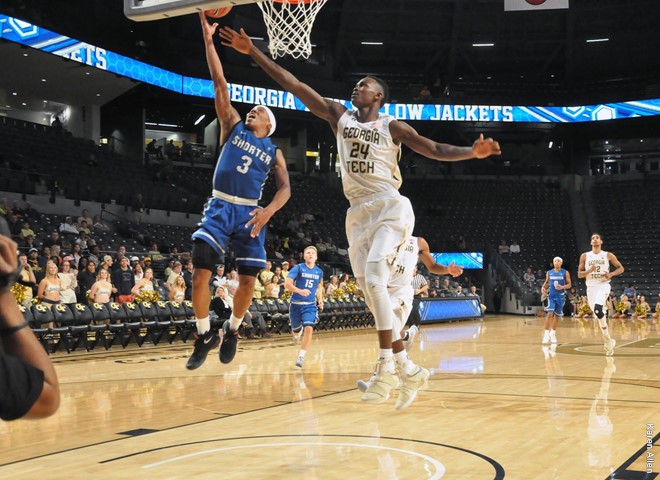 Many basketball players would be overdramatic with hand signs or emotional yells when shooting like that occurred at home, but not Taylor. I have been to almost every home game this season, and I have never seen or heard Taylor be an obnoxious or arrogant player. Complaining to the refs? No. Yelling at teammates? Nope. Fighting with the other team? Never.

Fans can see that Taylor has matured to be an athlete with a desire to do whatever it takes to win, regardless of who is guarding him and how tall they are.

This season has been a highlight-reel for the senior, and the basketball nation has noticed. Newsweek writer John Walters and NCAA writer Wayne Cavadi both compared Taylor to the Boston Celtics’ All-Star point guard Isaiah Thomas, who is also under 6 feet tall.

“It is an honor to be compared to someone in the NBA. I feel like he plays just as hard as me, and we have a shared desire to be unstopped. Short guys are underestimated,” Taylor chuckled.

Taylor and Thomas are the type of players youth look up to because they challenge the “status quo” of basketball. You don’t have to be tall to pla
y the game, and if you think you do, then watch these guys play.

After surpassing the 1,000-point mark in December 2016 (after only two seasons, might I add), Taylor has proven his play is mightier than his size.

Junior guard Warren Helligar, who transferred to SU this season and helped the Hawks off the bench, said the season has taught him many lessons.

“I loved being around my team. This season was a really good learning experience,” Helligar said.

Despite the loss in the postseason, the Hawks hope to advance farther next year.

As for Taylor, you may see him playing in the NBA Development League, working on fufilling his dream of making it to the NBA.

Athletes put faith into work on, off field