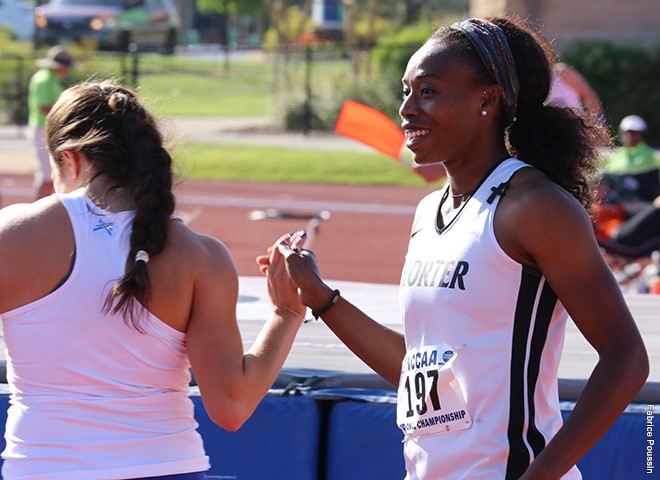 The morning before stepping on the track, Ayana Walker had no idea what the outcome would be from that day. All she knew was that she would be eating a banana for breakfast and that when the time came to race she’d have to lace her spikes and trust the plan that God had set in front of her.

Surely for a nine-time national champion and 12-time conference champion this would be just another race. All she would have to do is get down in the blocks and make sure that when the gun goes off she doesn’t get left behind. Sounds simple, right?

The mere thought of competing at the NCAA Track and Field Championship was enough to make her squeamish. This was also Shorter’s first full year in the NCAA Division II. So she was determined to make a mark for the program.

As Walker loaded the van to head to the Crossplex in Birmingham, Ala., her mind began to wander. She reclined her seat and plugged in her headphones to listen to her favorite pre-warmup song.

“The song ‘Trust Me’ by Richard Smallwood is a great reminder that I need to submit myself to the Lord. The lyrics remind me that I am not capable of doing anything on my own strength,” Walker said.

Over two hours passed before Walker and her coach reached the Crossplex. Before exiting the van, her coach reassured her that she was meant to be here.

Walker has known since her senior year of high school that Coach Scott Byrd was the kind of person she needed in her life.

“He’s like my second dad. I can’t even begin to explain how much he has shaped me not only into the runner, but also the person that I am today,” Walker said.

As she walked through the Crossplex double doors, her nerves fought to escape her body. Her stomach howled despite having eaten breakfast hours earlier.

Making her way through crowds of athletes and coaches, she eyed those who brushed past her. After checking in for her race, she looked at her watch.

Only two hours until go time.

Walker searched the bleachers to find her coach. She already knows what he is going to say.

After chatting with her coach,   she was greeted by her family and friends. The nerves swirling had now turned to adrenaline. She started to think that this race was bigger than her. It was for everyone in her life who had a hand in getting her where she was that day.

Greeting her supporters with hugs and smiles, she came face to face with her most important one of them all – her mom, Pamela Walker-Luke. Of the five years she has been at Shorter, Walker’s mother has been to almost every track meet. No matter the distance.

“I don’t care if I was in Alaska trying to pin a tail on a donkey, my mother would be right there to support me,” Walker said.

The time was 11 a.m., and Walker needed to get ready for her race. She made her way past unfamiliar faces and hummed Smallwood’s song from earlier to relieve her anxiety. She went through 45 minutes of warmup drills all the while channeling every ounce of worry from her mind.

“The nerves were eating away at me, but at that same time I was more confident than I had ever been. I knew I had placed all my trust in the Lord, so that my confidence was lying solely in him,” Walker said.

But just a day before, the same pre-race confidence was nowhere in sight. While participating in a practice session, Walker nearly collided with an opposing athlete who walked out in front of her. In an attempt to not run over the athlete, Walker tweaked her hamstring. According to her athletic trainer, Walker had sustained a grade 2 hamstring injury.

Her coach says despite his unwavering attempts to scratch her from the meet, Walker was adamant she could run.

“She was not going to let me take her out of the race and no matter how much I pleaded she had already made up her mind,” Byrd said.

She spoke one final prayer before stepping onto the track. “Trust Me” was replaying in her head. Her focus was on winning and nothing could deter her from it.

She found her way to the outside lane, set her blocks and hummed lines of Smallwood’s song.

“I will be with you …I’ll never leave you …I’ll fight your battle …If you will only trust Me.”

Walker clutched the handcrafted, coconut shell, cross necklace she got from a Belize pen pal in 2009 and moved it inside her shirt, just as she always did since the first time she wore it. It is a token of her and the girl’s friendship.

“I wear the necklace as a constant reminder to pray for the less fortunate people of Belize and as a reminder that all that I do is not for my own personal gain but for the glorification of the Lord,” Walker said.

Once the starting gun fired, Walker led the race. The bell rang as the officials signaled that the runners were entering their final lap. Walker increased her stride as she jetted off the last turn to cross the finish line.

Not only had Walker secured the 2015 NCAA 400-meter national title and set a new school record, she also made Shorter University’s history as the first NCAA national champion in its first full year as a Division II member. Unlike champions who know their win immediately, Walker didn’t even realize she had won until an hour later.

“I was in shock. It didn’t hit me until I was in the training room and the athletic trainer reminded me that I had won,” Walker said.

But Walker has not always seen such sweet victories. She has had to endure countless struggles of depression and injury that have set her back from the goals she had envisioned for herself. Her sophomore and junior seasons were plagued with hamstring injuries and eventual depression; the challenges led to several downward spirals. Unknown to those around her, Walker’s faith and patience were being tested.

“There’s been many times where she’s called me upset and overwhelmed, but one time in particular left a very unsettling feeling over me,” Lake said.

Lake remembered walking back into the dorm room they shared as sophomore roommates to find Walker on the ground. Lake thought Walker was playing a game. It wasn’t until she heard Walker saying she couldn’t breathe that she realized her friend was in trouble.

“She kept giving me one worded responses and not really showing me any signs of getting better,” Lake said. “It was only after I talked her down and positioned her upright that she then began to recuperate.”

For much of her life, Walker was able to rely on the support of her friends and family to get her through tough times. It wasn’t until after she graduated and moved to Clermont, Fla., to pursue a professional track and field career that she realized she was on her own for the first time in her 24 years.

Her challenges and lack of a support system drove Walker back to Rome, Ga., in August 2016 where she decided to train with her Byrd again. According to Walker, the switch was necessary if she wanted to continue having passion for track and field.

“Florida was great including the coach and teammates, but the pressures of money and making sure that everyone had my best interest at heart was daunting,” Walker said.

Walker secured a job at the Greater Rome Chamber of Commerce, the same place she did her college internship. As her training progressed, so did her attitude on life. No longer did the uneasy feeling of being isolated haunt her; instead, she focused on preparing herself for the 2017 USA Indoor Championship and the 2017 World Championships.

But that same month, she began to feel a pinch in her hip. A local physician diagnosed her as having a torn labrum in her right hip.

“I said to myself, of course this would happen to me. I remembered letting out a hysterical laugh when the doctor told me my diagnosis,” Walker said.

Walker said it took long nights of frustrated talks with God before she remembered the lesson of patience she had learned earlier.

Walker’s teammates know that this is another setback that she will overcome.

“To see someone endure so much and still find a way to praise God is unbelievable; her testimony in the end will be so much greater than the pain she has had to bear,” teammate Jasmine Crump said.

Though Walker’s national championship aspirations have been put on hold, she admits the journey will be worth it in the end. She hopes that one day she can wear the USA logo across her chest. 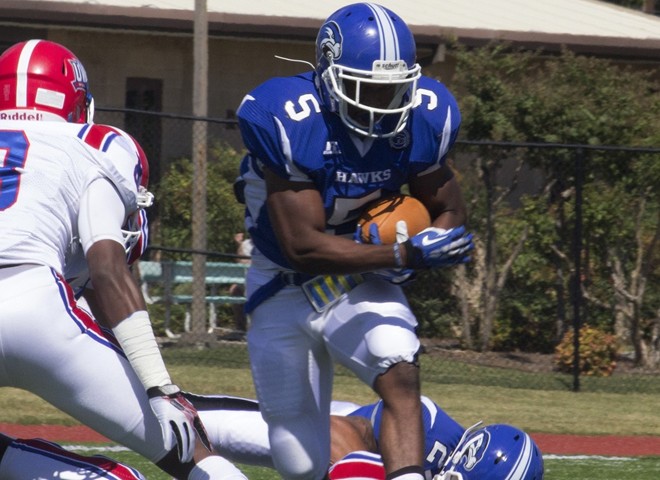