Many of the sports teams on campus choose to use their sport for community service and ministry. Lacrosse, basketball, soccer and countless other teams are volunteering around Rome.

With only one year of the women’s lacrosse program completed, this group is trying to make a statement for the Hawks not just on, but off the field. Freshman pre-med major Rita Cave and her teammates are highly involved with a program called Third Street Ministries.

“Off campus, we are helping homeless people and sharing the Lord with them,” said Cave.

Each Tuesday from 2 to 4 p.m., the lacrosse team spends time at Third Street Ministries, which provides hot showers and other essentials for less fortunate people. The members hand out Bibles, interact with the children and make hot chocolate, lemonade and sandwiches for people, according to Coach Brittni Dulaney.

“We would love for anyone to donate clothes and toiletries if they would like to,” said Dulaney. “Really, we are just trying to build relationships with the women and families who come, and encourage them through Bible study and friendship.”

Not only is the lacrosse team living out its faith, but the women’s basketball team is as well. The team volunteers at an open home as well as a community kitchen.

“A lot of girls mentor in the schools around here during the year and basketball camps during the summer,” said Emily Trew, sophomore point guard.

This past fall semester, the men’s and women’s soccer teams volunteered at the Boys & Girls Club. Each week, the players were given the opportunity to play soccer with a group of children after school.

“It was great!” said junior forward and midfielder, Kayla Bell. “We got to share our love for soccer with a ton of kids.”

Both soccer teams hope to participate in more community service this spring, as well as the men’s and women’s basketball squads who are taking a mission trip in May to Saint Vincent. The teams will play against Saint Vincent’s national basketball team as well as work with youth and share the gospel. 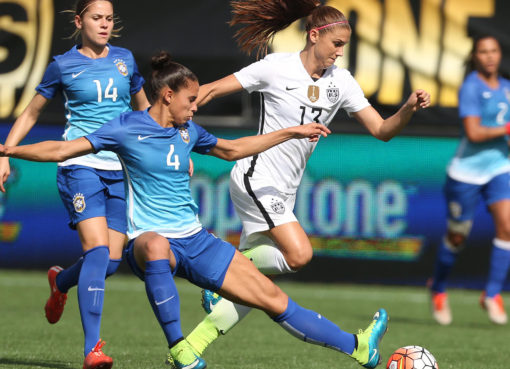