Rivalries in sports are known for their hostile environments, incredible finishes and historic games. Shorter University’s rivals were once obvious and known, but since the transition to NCAA Division II, the school’s rivals have become less known and important. Students around campus have trouble even naming the school’s biggest rivals.

“I know Berry was a big rival, but we don’t even play them anymore. Other than that, I don’t know who our real rivals are,” said freshman sports management major Jordan Coates.

Coates a,long with other students around the school, realize that Shorter no longer plays Berry in many of the traditional sports that brought in the big crowds. Shorter athletic director Bill Peterson assures that the reason is not due to Shorter’s lack of effort to play the cross-town rival.

“It’s Berry, not Shorter. The games we used to have were huge. I wrote a proposal for an event to play them, but they simply won’t play,” said Peterson.

The proposal Peterson wrote was a “fall festival” of sorts between the two historic rivals. The plan was to take a weekend in the fall and join Berry and Shorter at Ridge Ferry Park on Friday night for festivities, food and a concert. On Saturday, the rivalry would be in full force. There would be a volleyball match, cross country meet, and men and women’s soccer games during the day finished off by a football game in the evening.

Shorter has gained new rivals since joining the Gulf South Conference. In basketball and softball, the University of Alabama in Huntsville has become a classic.

“Their softball program has been nationally ranked and so has ours. Their head basketball coach is in our Hall of Fame. They are only about two hours away so it makes for a great rivalry,” said Peterson.

Before Shorter transitioned to the Gulf South Conference, one of the biggest games to be at was Shorter vs. Lee University. Lee has recently made the jump to the Gulf South Conference and will be competing with Shorter in all eligible sports once again. Both schools were competitive and won championships in NAIA competition before jumping to the NCAA.

Shorter’s focus on transitioning to NCAA Division II has made the focus on attending rivalry games take a back seat for the past couple of years. At an eye’s glance, attendance to games that once brought in sold-out crowds are no longer bringing in the numbers they once did. Students are not travelling with the teams like they once were.

“I haven’t been to an away game. They just don’t seem worth my time since we can’t really win a championship,” said freshman early childhood education major Taylor Dunn.

Peterson believes these games will gain the respect they once had and deserve once Shorter has been fully instituted as an NCAA school and can once again compete for championships.

“A lot of the excitement will be back when we can win championships. Everyone knows no matter how good we are, we aren’t going to the tournament,” said Peterson. 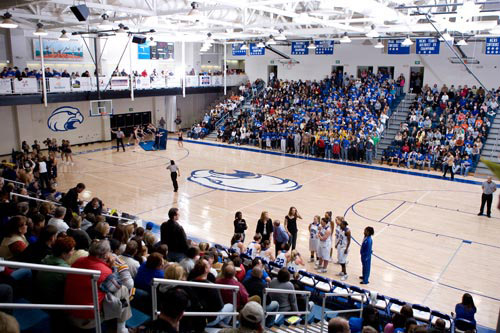 The truth behind home-field advantage