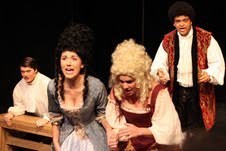 Shorter’s Opera Theater put on Opera Scenes, a fall opera that contains a collection of scenes from various operas, operettas and musicals. It featured scenes from Gondoliers, Tales of Hoffman, Cosi fan Tutte, The Old Maid and the Thief, Don Giovanni, Elixir of Love and The Worst One Ever.

“I enjoyed watching Jacob Case dance with Dr. Vanderbush,” said Miller. “That was my favorite part.”

While the audience enjoyed the show, the performers have said they enjoyed it more. Performer Candace Hays said, “I liked being Miss Pinkerton and being uptight and snotty, yet making the audience laugh by falling in a chair.”

Many performers said nerves were high, but as each performer stepped on stage, they transformed themselves into a new role. This was made easier by the lighting and technical crew. According to the crew, they tried their hardest to create the set and illuminate the stage in just the right way so that every character was accented nicely.

This particular opera seemed to be a great time of growth, according to both faculty and students. Popham said, with a big smile, the most enjoyable part for her was, “Seeing the students grow.”

Performer Garrett Baker agreed, saying that he learned a lot under the direction of his professors

Shorter’s Opera Theater will also be performing Bastien und Batienne (in English) and Riders to the Sea next semester.

Audiences hungry for debut of “The Hunger Games”