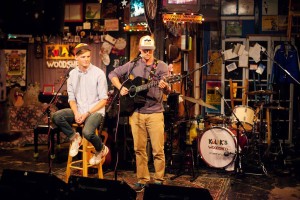 Senior music major and Spanish minor Joel Norman and his childhood friend Isaac George of Woodstock, Ga are gradually moving into the music spotlight as the talented duo, “Isaac and Joel.” Although they do not necessarily have a certain genre of music that they try to stick to, the guys are typically described as having an Indie pop vibe. They have been working together as a duo for a couple of years now and plan to have many more years ahead of them.

Norman and George first met in middle school after their older brothers played basketball together. After meeting they established a friendship that lasted throughout middle and high school and that revealed to them a common passion; music. “We joke that we first joined together as a band in eighth grade,” said Norman. “We started making music together then just by using a guitar and my laptop. We officially joined together though in 2013, after my sophomore year, and we would upload our songs onto YouTube for people to hear us.”

Although these talented guys still strive to upload a YouTube video every month, they have gone from just producing YouTube videos to holding live performances in front of over a hundred people. Within their busy school and work schedules, Norman and George make every effort to hold a show once or twice a month. “Booking a show is actually pretty easy,” said Norman. “We try talking to someone who we know is putting on a lot of shows and we ask them if we can open up for them. We have a lot of connections in Auburn so we perform there quite a bit and then we just send our music to different people in hopes that they will like us.” Performing in places like Auburn and Woodstock, the guys have not gotten to perform in Rome yet, other than at our Homecoming. They have been trying to work out a date with The Brewhouse downtown and they have a show coming up in Kennesaw on April 29th that they hope many Shorter students will be able to attend.

At their performances, they will play many live cover songs, as well as songs that they have written together. In regards to the process of writing a song, Norman said it can be a very simple or complex experience. “We start by coming up with a cool melody and then we put some chords with it. After that we establish a phrase that we like and then we form all of our lyrics off of that phrase.” According to Norman, some songs take a couple of hours to write and others take weeks. “Sometimes if we are struggling with writing one we just have to put it down and come back to it later.”

One of their favorite songs that they have written will be released within the next few weeks and is titled “When We Were Kids.” “This song really hits home because it came from real life experiences that we would like to relive,” said Norman. “It is about the freedom of being a kid and not having any real life issues to worry about. It is our best song musically and it is upbeat where you can dance to it if you want or just listen.”

After being friends and performing together for so long Norman and George have come to rely on each other both musically and individually and have been able to create many memories. Within their band they both sing and they both play instruments. They constantly try to tradeoff singing so there is no lead singer. “We work really well together because Isaac always comes up with cool instrumental parts, but he never can finish them. I jump in and help out and before you know it we just came up with a three minute song together,” said Norman. “My favorite memory I can think of with Isaac would be in 2013 when we decided to take a trip to Los Angeles to do a show. When we got there it ended up being in front of only about six or seven people but we said ‘hey, let’s have an awesome time performing in front of these people.’ It was a great experience and we really grew as friends and as a duo because we had no inhibitions, and we were completely confident.”

“Isaac and Joel” are a successful duo which will continue to progress over the years. According to Norman they started out awkward and nervous at times and did not know how to control and engage an audience. Today though, they are confident and cannot wait to step out in front of the crowd each time they have a performance. Both Norman and George have the ultimate goal of being able to live off of music. “We do not care about being famous, but we care about being successful enough to support ourselves through music. Everything else would just be icing on the cake,” Norman said.

From the looks of things now, this goal appears to be reachable. Recently the guys have been meeting with someone from a good size label who seems to be very interested in helping them achieve what they have always wanted. With the determination and talent that both Norman and George have, “Isaac and Joel” is definitely a group to keep your eye on. To remain updated on performances that they have coming up, be sure to follow them on Twitter at @isaacandjoel and on YouTube at www.youtube.com/isaacandjoel. 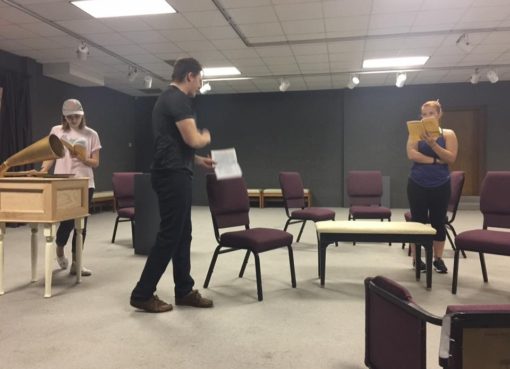 Students join with nation to “Stand for Freedom”