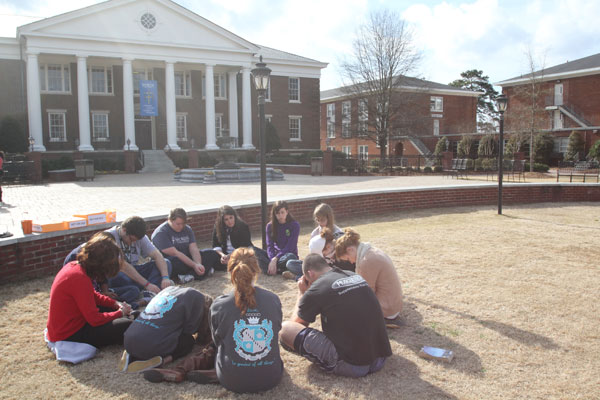 If someone enters Shorter University’s library in late November or April, he or she is more than likely to discover numerous college students in a stress-induced frenzy scrambling to memorize those last few pages of notes.

A Brigham Young University study found that college students are more stressed than ever in the midst of their fight to be the greatest they can be in their academics.

At times, the stress students put on themselves to perform well during finals week can only lead to more and more stress.

According to a New York University study, stress is the No. 1 reported impediment to academic performance, and 6 in 10 college students reported having felt so stressed they couldn’t get their school work done.

Cassie Thomas, Shorter’s director of student life and recent Shorter graduate, found that setting goals for herself as a student during studying was beneficial to getting through finals.

“I would read over two chapters worth of notes, and then I would give myself a five or 10-minute break,” Thomas said. “You have to take time to rest your brain.”

“When I was a student, we would make it a point during the week to take a few hours to enjoy doing something fun and give our minds a rest for a few hours,” Chatmon said, “and after our activity, we would go back to work on studying for our next final or continue to work on our paper.”

Chatmon added that it’s important to exercise time management during finals week, which leads to the next bit of advice: sleep.

Despite the urge college students may have to pull all-nighters, Thomas believes sleep is important for finals week.

“The extra couple of hours studying seems like it will be beneficial, but in reality if you do not get enough sleep, you will have a hard time recalling all of the information you were studying,” Thomas said.

Junior sports management major Kelsi Jones has first-hand knowledge of how vital sleep can be during finals week.

“As a natural crammer, I know it gets tough because you want to study the whole night, but you must spread your studying out, manage your time well and give yourself plenty of time for good rest.”

But even beyond incorporating natural habits like stress breaks and sleeping, there are other steps students should take to prepare for finals.

Psychology professor Andrea Stiles pointed out the importance of making studying a habit from the start of the semester to combat the possibility of cramming studies during the week of finals.

“Don’t get behind. Read and study as assigned in syllabus from the beginning of the semester,” Stiles said. “Make and keep notes. Read back through notes weekly and condense them as you more fully grasp them from week to week.”

The key to success for any student to get the grades he or she wants depends somewhat on the teacher. From the professor’s perspective, preparing students with the information they need is just as important as students reviewing the material.

“I review with students and typically give a study guide, either in written form or through a class lecture so that there are no surprises at test time,” Stiles said. “I also offer to have them come visit me during office hours to discuss anything they are unsure about.”

Finals week can cause sheer panic in freshmen students, and more and more freshmen are finding themselves struggling to stay on top of their personal health when finals week comes.

The UCLA Higher Education Research Institute found that nationwide first-year-college students’ sense of emotional well-being is at its lowest since 1985.

Freshman biology major Alli Bell, having just completed her first finals week, has learned that its crucial to take care of yourself at finals.

“It’s so easy to get stressed out, so make sure to stay away from distractions.”

“Take 30 minutes or an hour out of the day to do something fun,” Bell said. “Plus, that gives you a study break to look forward to, and it keeps you calm.”

Jones said her reliever during finals week is the community of people in which she surrounds herself.

The Shorter University Office of Student Life offers students a break through its finals week events at the end of each semester.

Shorter’s “Late Night Breakfast” is always held the first day of finals and is an activity to go to for a study break and an abundance of breakfast food. It is also a chance for faculty and staff to “serve” students in ways they don’t normally do … with a ladle in hand or an offer to pour their beverage of choice.