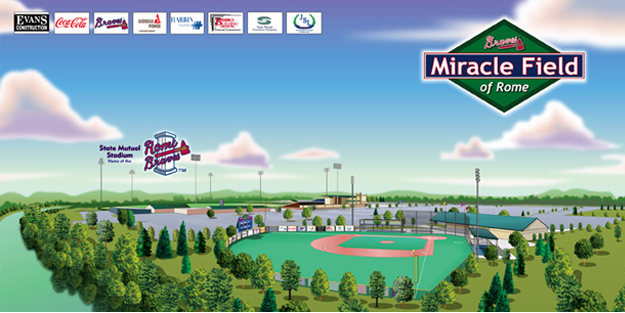 Sunlight glistens across the red and green rubberized turf field where a new baseball season is set to begin. Around 70 eager children will take the field on game day in their respective team jerseys. These particular children are given a chance to play the game they love at the Miracle Field. Some may even call their ability to play here a miracle.

The Miracle Field of Rome, which is host to the Miracle League, opened in the spring of 2012. The Field eliminates the obstacles that keep children with mental and physical disabilities off the baseball field and provides them a first-hand experience of the excitement of America’s favorite pastime.

The Miracle League Website states that the main barriers for disabled children arise from conventional natural grass fields, but the Miracle Field uses a custom-designed, rubberized turf that accommodates wheelchairs and other medical devices while also helping to prevent injuries.

The League only has four rules: each player bats once each inning, each player is safe on the bases, each player scores a run before the inning is over and each team and player wins every game.

But, the Miracle League is about more than just baseball games.

The League strives to provide each player with a memorable experience. The League is about helping the players make new friends and build self-esteem, and it strives to treat the players just like other athletes.

Star Crone, Miracle League player Trey Crone’s mother, says her son who was born with Down syndrome fell in love with baseball at a young age. Trey, who is now 27, has been participating in the Miracle League since he was a boy, and Ms. Crone remembers when her son had to play on wet, muddy fields that posed a challenge to both him and his teammates.

“That’s why Miracle Field is such a great thing for our players,” Ms. Crone said.

The Rome Braves’ Director of Special Projects and the Director of Miracle Field Christina Shaw said the Field enables challenged players in Northwest Georgia and the surrounding areas to enjoy playing baseball in their own community. She added that it’s important for their caregivers to be able to sit in the stands and to enjoy watching their player and cheer them on.

The Rome Braves Organization plays a significant role at the Miracle Field, where they maintain and upkeep the Field as well as make any improvements. They also coordinate volunteers and work closely with the Rome Recreation Department.

A normal game day at the Miracle Field consists of the Rome Braves staff opening and cleaning the facility in the morning. Volunteers arrive about 30 minutes prior to the games, and they fill out forms and receive their t-shirts. The national anthem plays prior to the start of the first game, and two one-hour games are then played.

The Rome Braves players also visit the Field during the spring season to serve as buddies.

The League uses a “buddy” system of pairing each player with an able-bodied peer to help the athletes, and the result is an indescribable bond.

Ms. Crone believes it’s amazing that the Rome Braves players take time out of their day to come out to the Miracle League games.

“The Braves come out and pitch for our players and let them get their pictures taken with them,” Ms. Crone said. “It makes our kids feel important when the Braves volunteer to be buddies for them.”

Ms. Crone said her son has made many memories at Miracle Field, but there is one that stands out.

“Trey was in the outfield and had his glove out, waiting to catch any ball that came his way,” Ms. Crone said.

Then the miracle catch at Miracle Field happened.

“It’s like God put the ball right in his glove,” she said. “At first, it scared him when the ball fell in his glove, but then he looked down started smiling and jumping up and down saying, ‘I did it, I did it’.”

The Miracle League and Miracle Field have an impact on more than just the players.

It never ceases to amaze Ms. Crone how time spent at the Miracle Field can turn her whole day around.

“The atmosphere at the Field just puts everyone in a good mood,” Crone said.

One of her favorite stories is about a Rome Miracle League player, who is also a Rome Braves employee during the season.

“He’s known for his love of the game, and he constantly supported and cheered on a local little league team in Rome,” she said. “In turn, they all showed up on his last game of the season with signs and sat in the stands cheering him on.”

Shaw’s favorite part about being involved with Miracle Field and the League is being able to share that impact with people who may have not been able to experience it before.

The Miracle League website states that “our players may not be able to run the bases or hit the ball as well as some of their peers, but they have an equal amount of love and determination to play baseball, and we want to help them achieve that dream.”

And that’s exactly what the program is doing.

Volleyball looking ahead for strong finish