Home > News > Passion: A word that pierces the soul

On Jan. 17-18, the Phillips Arena in Atlanta Georgia was filled with twenty thousand college students from 33 different countries gathered together to worship the Lord as one for Passion 2014 conference.

Passion is geared for college student eighteen to twenty-five; however that didn’t stop Shorter’s own Assistant Dean of Students, Tam Odom. Odom is no rookie when it comes to the Passion Tours, “’I’ve been for about seven years now so I knew it would be worth the trip,” Odom said. Passion started out as a vision in a Georgia State dorm room in 1997 that grew into the world-know conference it is today.

Sophomore liberal arts major, Arden Shanklin claimed Passion was an inspiring atmosphere. “I believe Passion was started to inspire college students to get out and do something. Now that we have been inspired we should do something,” said Shanklin.

For many the experience was like nothing they had ever seen, the atmosphere was described with words like “encouraging,” “full of Jesus,” “love,” “little glimpse of Heaven.”  “Standing in the arena with 20,000 other followers of Christ crying out to the sovereign God is breathtaking.” Odom said.

Freshmen Christian studies major Will Lawson described it as crazy. “The whole place was shoulder to shoulder packed with people. Everyone in the building was just pouring their heart out in worship,” said Lawson. 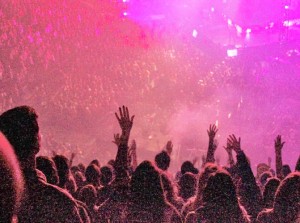 Passion is known for their love of people and community involvement all over the world this year’s campaign was to raise money to send bibles to the people of Iran.

Junior middle grades education major, Katherine Bateman was overwhelmed with her experience at Passion this year. “My heart is broken for those people, I became overwhelmed over the fact that I was getting the chance to be part of something bigger than myself. God chose the students of Passion 2014 to be a part of His glory in taking His Word to the people of Iran and that is so humbling.”

God’s Spirit was present in the Philips Arena according to Batemen. “The Lord showed up and showed out in Philip’s Arena. I don’t honestly believe that a non-believer could have stood in there without at least questioning His existence. When I came to Passion, I asked the Lord to bring me face to face with Himself, and that’s exactly what He did. He literally brought me to my knees multiple times. So yes, God was in Philip’s Arena. He was there, He was moving, and He was teaching.”

God confirmed calling, refreshed minds and renewed many hearts in the arena during the conference, “I had a refreshing movement of the Holy Spirit to open my eyes to needs and to the urgency of making Jesus famous among the people he has placed me in front of,” Odom said.